A man on a safari in Tanzania got more than he signed up for when a cheetah jumped inside his jeep.

Britton Hayes from Seattle, Washington, was with a tourist group when three cheetahs out hunting in the Gol Kopjes of Serengeti National Park took interest in the tour.

The group was focused on one cheetah who climbed onto the hood of the jeep when a second decided to jump inside the back of the vehicle.

A terrifying video shows Hayes remaining eerily still as one cheetah explores the back seat of the car right behind him.

What have we got here then? The cheetah licks its lips after jumping into the back seat of a safari jeep with a Seattle man on a trip to the Serengeti in Tanzania

'We started to notice the cheetahs became curious of the vehicle,' Hayes said. 'But it was too late to drive quickly away or anything like that because you don't want to startle the animals, because that's when things usually go wrong.'

The cheetah sniffed around and chewed on the seats before leaving the jeep.

Hayes credited his tour guide for helping him remain calm and showing him how to slow down his breathing.

This helped keep the cheetah at ease while it was exploring the vehicle.

'Honestly, it was probably one of the scariest moments of my life while it was happening,' Hayes said. Never mind me: Britton Hayes from Seattle, Washington, was told to stay calm by his tour guide 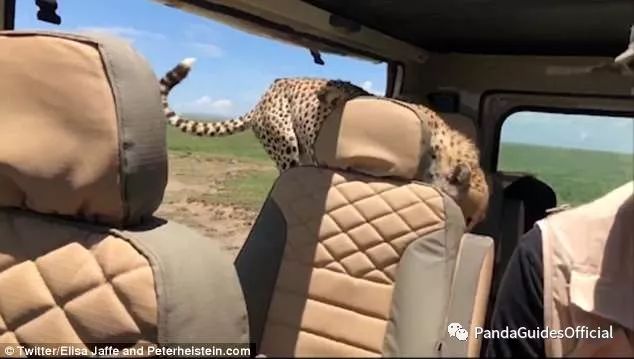 Sniffing out the situation: The inquisitive cheetah started climbing into the vehicle

Just taking a look around: The wild animal prowled the back seats of the jeep as Mr Hayes stayed still

'I felt like I had to clear my mind of any thoughts because from everything you're told about predators like that, they can sense fear and any sort of discomfort you're feeling and they'll react accordingly.'

Once the cheetahs walked off, he explained that the entire group just starred at each other for 10 seconds before they were finally able to relax again.

Hayes admits that they laughed about the event hours later and were relieved nothing bad happened.

The breathtaking video was taken by Peter Heistein while the group was on the Grand Ruaha Safari.

or scan the QR code below!

Please note that we recruit the teachers from the following countries ONLY: USA, UK, Canada, Australia, New Zealand, Ireland and South Africa.

If you are a native teacher now based in any city in China, please don't hesitate to add WeChat: 12753351 for inquiry.