Your guide to the Beijing Media Art Biennale

Arguably the centrepiece of this year's Beijing Design Week, the first Beijing Media Art Biennale (BMAB) will be held at multiple sites around the city starting on September 25. Naturally its focus is on 'media art', a catch-all phrase for art being made in new media, which seem to emerge faster than ever these days. BMAB's program-within-a-program is loaded with virtual reality displays, forums and panel discussions on a grab bag of bleeding-edge technological issues, and at least a nominal focus on how art, technology, and ethics might intersect in the interesting times to come.

Chief researcher and executive curator Lulu Li explains that the theme of the first BMAB is 'ethics of technology', with technology split into five 'techno-science pillars', in her words. These are: physical science, AI/robotics, big data/algorithms, bio-genetics, and MR. The last one stands for 'mixed reality', which includes virtual reality (VR), augmented reality (AR), simulated reality, and any other virtual/real hybrid experience achievable through technology.

Each of these is a deep, constantly evolving field in its own right, and Li jumps in as a fearless autodidact. In discussing the core topics surrounding BMAB, Li moves freely across fields: in one recent BMAB WeChat post, a history of cyborg technology segues to the nascent CRISPR gene editing technology and its potential to create human-animal chimeras. She keeps a long, growing bibliography in her communiques about the event, including Donna Haraway's 1983 Cyborg Manifesto, science writer Juan Enriquez's 2011 ebook Homo Evolutis, and 2015 best-seller Sapiens by Israeli historian Yuval Noah Harari.

The latter received a rave review from no less a steward of the future than billionaire Bill Gates. Harari's forthcoming followup, Homo Deus, tracks possible near-future scenarios for the co-evolution of humans and technology, from the potential to develop godlike cognitive abilities to a darker scenario in which the rise of AI relegates humans to the role of intellectually inferior animals, or splits us into evolutionarily distinct post-sapiens species along fault lines of economic inequality. This is one of many areas where a discussion about the 'ethics of technology' is needed today. Li says that BMAB's program is designed to tackle the big metaphysical questions: 'What is free will? What are human integrity and equality? Will we be made redundant by robots who can carry out cognitive tasks? What are nature and natural objects? What is the responsibility of modern morality?' She says that 'with the emergence of new concepts made possible by all of these newly available technologies, like cyborg technology and eugenics, we are involuntarily put in a position to think like philosophers'. The BMAB program features so many moving parts that it won't really be nailed down until it launches. Li says that the core exhibition will give each of the five major themes a wall, with a visual overload of diagrams and mad-scientists' sketches competing for visual attention. The exhibition catalogue will include essays from thinkers in different fields, including theoretical physicist Kaddour Chalebi from the Chinese Academy of Science. The BMAB program also includes the AI team at Microsoft's Beijing office responsible for creating Wechat-bot Xiaoice (小冰), which recently passed a benchmark test by writing a (surrealistic, Li says) 300-word gaokao essay. Xiaoice (pictured above) shares its underlying technology with Tay, a Twitter chatbot that Microsoft US launched this past March (pictured below). Tay was pulled only days after it went online, as its stream was hijacked by netizens feeding the AI incendiary racist memes. Xiaoice is still around, and BMAB visitors will be able to actually talk to her in a phone booth set up by the Microsoft team. 'Xiao Bing has a new ability to have a real-time conversation with whoever is there to answer the call', Li explains. 'It's a bit like The Matrix.' 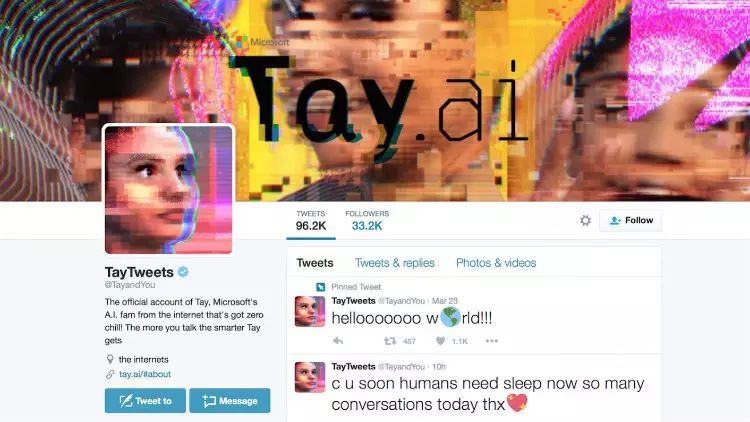 A bit too like The Matrix for some, no doubt. But these are conversations we need to have now. What are ethics for an AI? What's the future for we sapiens with so many disruptive technologies emerging, from quantum computing to genetic hacking? Check out BMAB to generate some ideas.

Hit 'Read more' to get the full lowdown on BJDW.