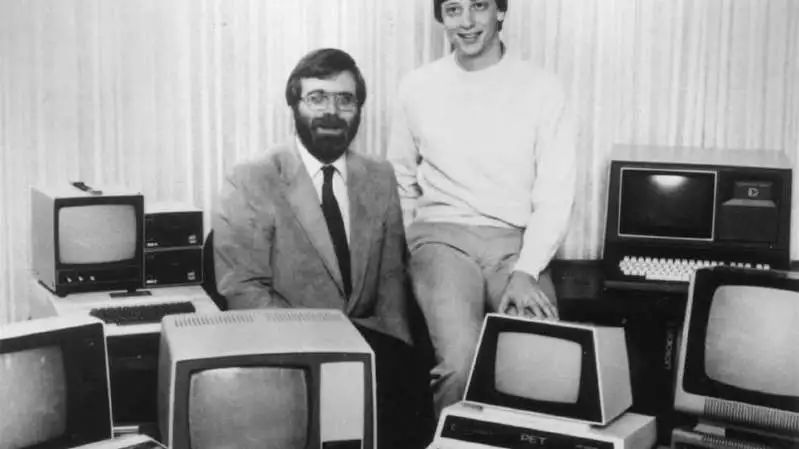 a man posing for a photo in front of a computer: Paul Allen and Bill Gates in 1981

It’s easy to think of Microsoft and immediately think of Bill Gates. While Gates led Microsoft to where it stands today, co-founder Paul Allen played an early instrumental role in creating the software giant. Originally named “Micro-soft,” Gates and Allen founded their software company in 1976 after meeting as students at Lakeside School in Seattle. It was this unique friendship at the right time and the right place that ultimately changed the world of computing.

Gates and Allen had been buddies in school, and were part of The Lakeside Programmers Group that traded computer programs for free time on the school’s computers. Funded by the Lakeside Mothers’ Club, the school installed a computer terminal in 1968 and it was the students that figured out how to use it before the teachers. Gates and Allen saw the potential of using computers to process local car traffic data, and created a business partnership named “Traf-O-Data” to read data from traffic counters on roads and create reports for engineers. It was the early steps of what would ultimately become Microsoft.

“Even though Traf-O-Data wasn’t a roaring success, it was seminal in preparing us to make Microsoft’s first product a couple of years later,” explained Allen in a 1995 interview with Fortune magazine. “We taught ourselves to simulate how microprocessors work using DEC computers, so we could develop software even before our machine was built.”

a close up of text on a white surface

It was an issue of Popular Electronics magazine in early 1975 that excited both Allen and Gates, avid BASIC programmers. It featured the Altair 8800 microcomputer with an Intel 8080 CPU (a variant of the 8008 design) and an 8-inch floppy disk drive. This computer was designed to appeal to hobbyists that wanted a machine of their own, instead of big businesses, who were the only organizations who could afford most computers at the time.

Gates and Allen were excited by the Altair 8800 because it was clear computing was in the very early stages of becoming more accessible to consumers. The pair saw the early potential of software, and wanted to improve the performance of the Altair 8800 by creating a BASIC interpreter to make it more appealing to hobbyists. Allen famously convinced Bill Gates to drop out of Harvard to start Microsoft, after he himself dropped out of Washington State to take a job at Honeywell in 1974.

Allen even created the original Micro-soft name in 1975, and the pair went on to design software for the Apple II and Radio Shack’s TRS-80, which eventually led to Microsoft’s MS-DOS operating system in the 1980s. Allen left Microsoft after only 8 years, following his diagnosis of Stage 1-A Hodgkin’s lymphoma. In a memoir, he revealed how the partnership with Bill Gates wasn’t always friendly because the co-founder allegedly wanted a bigger stake in the company. Allen retained his ownership of Microsoft after his departure in 1983.

Paul Allen, Bill Gates are posing for a picture

Allen was one of the richest tech billionaires in the world in 2017 according to Forbes, and he used his wealth wisely as a philanthropist. Estimates suggest he donated more than $2 billion in total, including $500 million to his Allen Institute for Brain Science. The Seattle-based non-profit research organization has helped accelerate a better understanding of how our brains work, and the data is available free to fellow researchers.

After leaving Microsoft, Allen funded Vulcan in 1986. Vulcan was an outlet for most of Allen’s philanthropy, and it assembled technologists, biodiversity experts, scientists, filmmakers, and art curators to invest in conservation, global health, climate change, space exploration, any many other big challenges. Vulcan helped transform Seattle with investments in local art, entertainment projects, and real estate. Additionally, Allen founded the Paul G. Allen Family Foundation in 1988 to invest in technology, data, and policy efforts in the Pacific Northwest.

Allen was also passionate about music, entertainment, and sports. He first heard Jimi Hendrix play guitar when he was a teenager and described the moment as “life changing.” Allen went on to master the guitar so well that Quincy Jones once described him as the second coming of Jimi Hendrix. His fondness of Jimi Hendrix led to him loaning $6 million to the Hendrix family to help in a legal battle to regain control of the guitarist’s image and music. Allen even formed a band, Paul Allen & The Underthinkers, and recorded a studio album in 2013. This love of music also extended back into the Seattle area. The Experience Music Project (EMP) opened in 2000, funded by a $100 million investment from Allen.

Allen purchased the Portland Trail Blazers basketball team back in 1988, and the Seattle Seahawks NFL team in 1997. He was even a co-owner of the Seattle Sounders FC soccer team. Most recently, Allen donated $26 million to the Washington State University to create the Paul G. Allen School of Global Animal Health, and created a Tackle Ebola initiative with $100 million of funding to fight the disease.

Allen was diagnosed with cancer in 2009, after being treated for Hodgkin’s disease back in 1982. He passed away this week, aged 65, from complications related to non-Hodgkin’s lymphoma. He will be remembered for his charitable work that has changed the world, and his early influence on Microsoft. Allen is no longer with us in person, but he signed the Giving Pledge to donate the majority of his wealth to charity, so his impressive work as a philanthropist will live on.